Maximizing the Value of Foliar Fungicides in Corn

Over the span of only a few years, foliar fungicide treatments went from a mostly new and untested practice to a trusted component of many growers’ management systems. This has occurred as research results and grower experience have demonstrated that fungicides can be very effective tools for managing foliar diseases and protecting yield in corn. However, studies have also shown that fungicide applications do not always result in an economic benefit for growers. Pioneer research conducted over the last several years has demonstrated that the value of fungicide applications can depend on disease pressure, hybrid susceptibility, and agronomic practices. 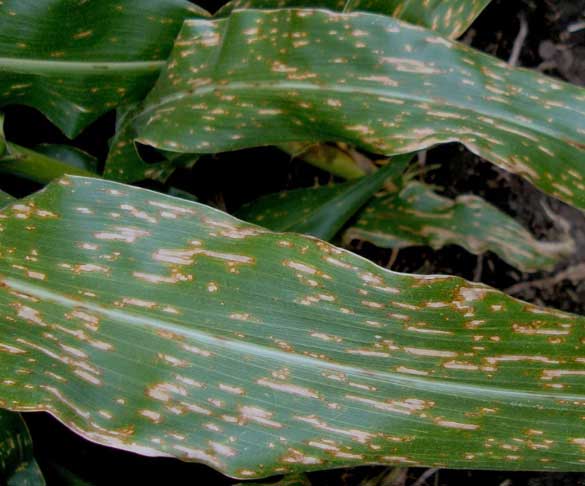 This Crop Insights summarizes the key findings of several Pioneer research projects on foliar fungicide use in corn conducted between 2007 and 2020. These studies involved several different foliar fungicide products and included both aerial and ground applications, but all were focused on application timings between tasseling and brown silk (VT-R2) except where noted. Some of these studies provided the opportunity to assess the value of fungicide treatments against specific foliar diseases due to the presence of a single predominant disease at the trial locations.

Between 2007 and 2020, Pioneer agronomists, sales professionals and cooperators conducted over 2000 on-farm fungicide trials comparing yield of corn treated with a foliar fungicide between tasseling and brown silk to non-treated corn. These trials encompassed a wide range of different hybrids, management practices, environmental conditions, and disease pressure.

The results of these trials provide an estimate of the average yield response that corn producers might expect from a foliar fungicide application. This average can serve as a starting point for foliar fungicide treatments decisions. Whether yield response in a given field is likely to be above or below this average will depend on the combination of disease pressure, hybrid genetic resistance, agronomic practices, and environmental conditions unique to that field.

Table 1. Yield response necessary to cover the cost of fungicide and application over a range of costs and corn prices.

Yearly averages in fungicide yield response ranged from 3.0 to 10.5 bu/acre in the on-farm trial survey. The majority of trial locations were located in the central Corn Belt; consequently, variation in yearly averages is largely reflective of differences in weather conditions and disease pressure in those states.

The most important factor determining the value of a foliar fungicide application is disease pressure. Foliar diseases can occur anywhere corn is grown in North America but are more common in the warmer, more humid growing areas of the South and East. Most widely-grown hybrids have at least moderate resistance to the major leaf diseases, which may be sufficient protection against low to moderate disease pressure. However, in years when weather conditions are very conducive for disease, a fungicide application may provide a substantial economic benefit.

There are two basic types of disease cycles among the fungal diseases that infect corn leaves. Many pathogens, such as northern corn leaf blight, overwinter in diseased corn leaves, husks, and other plant parts. Spores are produced on this crop residue when environmental conditions become favorable in the spring and early summer. These spores are spread by rain splash and air currents to the leaves of new crop plants, where primary infections are produced. Secondary spread then occurs from plant to plant and even from field to field as spores are carried long distances by the wind. As the plants die, the fungi remain in the dead plant tissue.

The rust diseases have a different cycle because they do not overwinter in crop residue and cannot survive the winters throughout much of the Corn Belt. Instead, disease starts in corn fields in the Southern United States, and spores are windblown long distances into the Corn Belt. Disease onset depends on weather systems that carry the spores northward combined with favorable conditions for infection. Secondary spread occurs similarly to the other leaf diseases.

Foliar infections can occur at any growth stage. The earlier lesions develop, the more leaf area is reduced and the more damage results. However, plants are generally more susceptible to infection after silking. Damage may include yield losses due to decreased photosynthesis and harvest losses if secondary stalk rot infection and stalk lodging accompany loss of leaf area.

In Pioneer and university studies with multiple hybrids of varying disease resistance, the probability of using a fungicide profitably has often been directly related to the susceptibility of a hybrid to the predominant leaf diseases. Pioneer® brand hybrids are rated on a scale of 1 to 9 for their level of genetic resistance to major foliar diseases, with 1 to 3 indicating a susceptible hybrid, 4 to 5 moderately resistant, 6 to 7 resistant, and 8 to 9 highly resistant. In cases where a foliar disease is not severe, a foliar fungicide application may not provide an economic benefit with a resistant or highly resistant hybrid. Hybrids that are susceptible to a common foliar disease are more likely to benefit from a fungicide application and should be monitored for disease symptoms, particularly when weather conditions are favorable for disease development.

Continuous corn and minimum tillage fields can be at higher risk of foliar disease and more likely to benefit from a fungicide application due to greater amounts of surface residue harboring pathogens from the previous corn crop.

Hybrid maturity and planting date have also been found to influence susceptibility to yield loss from foliar diseases. These factors are important relative to the timing of disease development. Later planted fields and/or later maturing hybrids can be more vulnerable to yield loss because they are still filling grain while disease development is peaking in late summer. Therefore, these later fields are often more likely to benefit from a fungicide application.

Pioneer scientists, agronomists, and university collaborators have conducted several corn fungicide studies in which a single foliar disease was predominant at the research location or locations. In some cases, research locations were chosen specifically due to their history of a specific disease; in others, environmental conditions happened to be favorable for a given disease when the study was conducted.

A research project was conducted over three years at the University of Tennessee Research and Education Center at Milan at a research site specifically chosen due to a history of high gray leaf spot pressure. The primary goal of this study was to determine the yield benefit associated with foliar fungicide management of gray leaf spot in hybrids with differing levels of genetic resistance. The plot area was in irrigated no-till corn production for four years prior to the start of the study, with a high level of gray leaf spot each year. Three Pioneer brand corn hybrids with differing levels of resistance to gray leaf spot were included in the study.

Results of the study demonstrated the potential for gray leaf spot to cause substantial reductions in yield when disease pressure is very high. Hybrid resistance was effective in mitigating a large portion of yield loss due to gray leaf spot; however, even with the most resistant hybrid, the yield benefit of the foliar fungicide application was great enough to potentially cover the cost of product and application (Figure 2). Under more moderate disease pressure, a fungicide application would likely not provide an economic benefit on a resistant hybrid.

Pioneer scientists conducted fungicide research trials at several Midwestern sites in 2009, a growing season that experienced unusually high common rust pressure in parts of the Midwest. Summer temperatures were cooler than normal in 2009, which favors development and spread of common rust. Studies were conducted at ten different field locations across five states. Corn yield response to fungicide application varied widely among research locations, largely due to differences in common rust pressure. Common rust was prevalent at research locations in Iowa, Illinois, and Indiana.

Figure 3. Average fungicide yield response of hybrids with low resistance (3 on a 1-9 scale) and moderate resistance (4-6) to common rust in Pioneer small-plot trials.

Common rust was prevalent at a trial at Macomb, IL, along with low to moderate levels of gray leaf spot and northern leaf blight. Notable differences in disease symptoms and yield response to fungicide were observed (Figure 4). 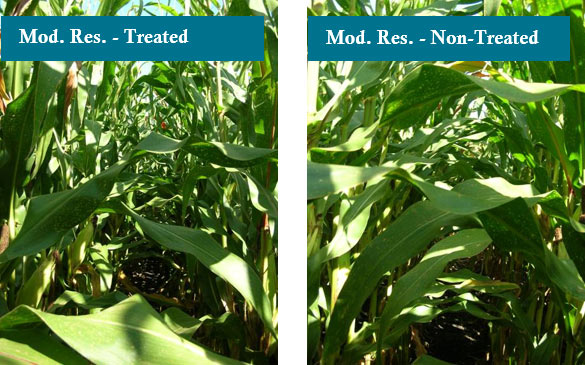 Figure 4. Two hybrids treated (left) and non-treated (right) with fungicide at Macomb, IL. The fungicide helped to protect yield of a susceptible hybrid (top) but provided little benefit on a moderately resistant hybrid (above).

These research results from 2009 demonstrate the value of foliar fungicides in protecting yield when disease outbreaks occur; however, genetic resistance of hybrids may also provide adequate protection and should be considered in fungicide treatment decisions.

Pioneer on-farm trials were conducted at 40 locations in Iowa in 2015 to evaluate corn yield response to foliar fungicides applied at different timings. Northern corn leaf blight pressure was high in much of Iowa in 2015 and it was the predominant foliar disease at the trial locations (Figure 5). Trials compared yield of corn treated with DuPont™ Aproach® Prima fungicide at the VT, R1, or R2 growth stage to non-treated corn. 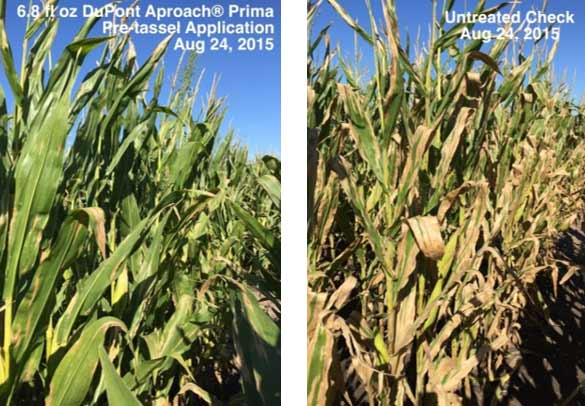 Figure 7. Average yield response to fungicide applications at the VT, R1, or R2 growth stages in 40 Pioneer Agronomy trials in Iowa in 2015.

Pioneer conducted fungicide research trials over two years in the southeastern U.S. at locations where southern rust was the predominant foliar disease.

A replicated research study was conducted near Camilla, GA in 2014 to assess southern rust infestation and corn yield response of six different Pioneer® hybrids with and without foliar fungicide treatment. This study included two different fungicide treatments: a single application at the V8-V10 growth stage, as well as a two-pass program with applications at both the V8-V10 stage and the VT-R1 stage. (The original protocol called for only the VT-R1 application, but treatment timings were altered when southern rust was detected earlier than expected at the research site.) Averaged over hybrids, there was no yield increase with early fungicide application alone, but yields were increased by an average of 20 bu/acre when the VT-R1 application was included (Figure 8).

Figure 8. Corn yield as affected by fungicide treatments near Camilla, GA in 2014.

(Means followed by the same letter are not significantly different based on Tukey’s HSD test conducted at the alpha=0.05 level. Means averaged over 2 planting dates and 6 hybrids.)

A study was conducted the following year across seven locations in five southeastern states to evaluate corn yield response to a single-pass fungicide application at VT-R1 for control of southern rust. Averaged over four hybrids and seven locations, corn treated with fungicide at the VT-R1 stage yielded 11 bu/acre more than non-treated corn (Figure 9). 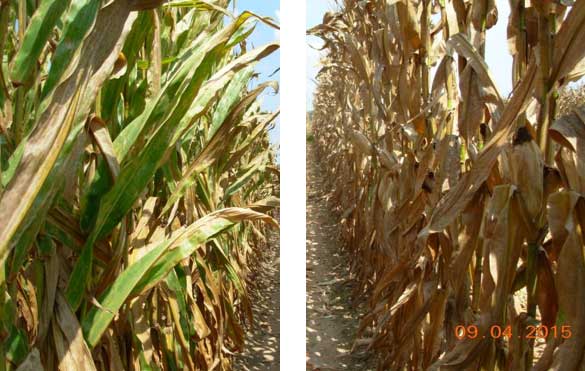 Figure 10. Corn treated with fungicide at VT-R1 compared to non-treated corn at a research location near Winchester, AR in 2015. Southern rust pressure was low at the time of application but increased in severity and ultimately caused premature death in the non-treated check before the end of the season.

The foregoing is provided for informational use only. Please contact your Pioneer sales professional for information and suggestions specific to your operation. Product performance is variable and depends on many factors such as moisture and heat stress, soil type, management practices and environmental stress as well as disease and pest pressures. Individual results may vary.