Use of Starter Fertilizers in Corn Production

Starter fertilizer in corn production has traditionally been recommended for fields with cool soil temperatures, including exceptionally early planted or no-till fields, those with high residue cover or fields in northern states. In cool soil conditions, starter fertilizer placed near the developing seed provides easily accessible nutrients until soil conditions improve and an adequate root system is established. Starter fertilizer has also been recommended for fields with low phosphorus levels, and research studies have proven the value of this practice. However, some growers seeking to exploit current grain price opportunities are evaluating whether starter fertilizer can play a more prominent role in increasing corn yields. This Crop Insights will discuss starter fertilizers, their traditional role in corn production, and whether starter may have a role beyond historical uses.

Starter fertilizer is defined as small amounts of plant nutrients – nitrogen (N), phosphorus (P) and potassium (K) – placed in close proximity to the seed, usually at planting (Hergert and Wortmann, 2006). Placement can be directly below, to the side, or to the side and below the seed. Growers sometimes consider broadcast or liquid fertilizer application to the soil surface as "starter"; however, these should not be included because nutrient placement is positionally unavailable to early seedling growth. To be a "starter," nutrients must be strategically positioned to enhance early seedling vigor and development.

Starter fertilizer placed in contact with the seed ("pop-up" fertilizer) is another option, but its use requires a great deal of caution to avoid possible germination and seedling injury. The amount of pop-up that can safely be applied is limited, and depends on the fertilizer used and soil properties. For example, starter fertilizer containing ammonium thiosulfate should not be placed in contact with the seed (Hergert and Wortmann, 2006).

A starter fertilizer is usually composed of two or more nutrients. Under most situations, a combination of nitrogen and phosphorus constitutes an effective starter material. Liquid 10-34-0 and dry 18-46-0 are common starter fertilizer materials. Liquid 7-21-7 and dry 8-32-16 are also commonly used. Other fertilizer formulations may be used as starters; for example, the addition of zinc and/or sulfur may be warranted in sandy, low organic matter soils.

To fully understand the role of starter fertilizer in providing basic nutrition to corn seedlings, it is useful to review the physiology of early corn root development.

After corn seeds imbibe enough water for germination, the first root structure to emerge is the radical, which is soon followed by the lateral seminal roots (Figure 2). The seminal root system does not take up substantial quantities of nutrients; instead, the young seedling relies primarily on the stored nutrient reserves of the seed at this stage of development. 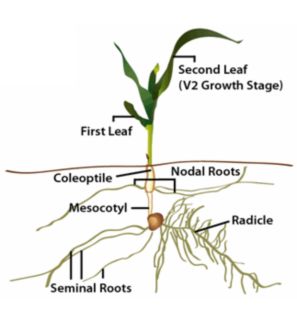 Soon after emergence (VE) the young corn seedling will begin to develop its nodal root system, the primary roots for water and nutrient uptake of the plant (Figure 2). If normal development of the nodal roots is impeded and the endosperm reserves of the seed become depleted, the plant will lack the basic nutrients needed for optimum growth. When nodal roots are impeded, above-ground symptoms may appear as less vigorous or less green plants.

By the V2 stage (2 leaf collars visible) it is important for corn plants to be actively taking up nutrients such as N (Figure 2). Although these nutrients are needed in very limited quantities, they are none the less essential in the plant's ability to run its newly developing photosynthetic machinery.

Stresses that impede nodal root development may be caused by living (biotic) organisms such as insects or diseases or by non-living (abiotic) physical or chemical factors such as soil obstructions, soil moisture conditions, cool temperatures, or fertilizer placement. Stresses may be continuous in the field, or may occur sporadically in microenvironments throughout the field.

Continuous or uniform stresses that affect plants equally often include cold or wet soil conditions or below optimum air temperatures. Although detrimental to crop growth and sometimes yield, these stresses are generally less damaging than sporadic stresses that affect one plant and not its neighbors. This is because individually affected plants are likely to fall behind in physiological growth stages if conditions remain unfavorable.

Once a plant begins to fall behind by two or more growth stages, it becomes increasingly difficult for the plant to catch up. This is commonly thought to be a consequence of shading by its competing neighbors. Shading slows the plant's growth rate, further reducing root elongation and nutrient uptake. Thus, the problem of competing for limited resources is compounded, likely for the remainder of the plant's life cycle.

Uneven stands have been reported to suffer corn grain yield reductions from six to as much as 23 percent depending on the severity (Nielsen, 2010; Nafziger, et al., 1991). This yield loss could be significantly reduced by starter fertilizer applications in cases where the primary cause of uneven stands is the inability of the young nodal root system to access sufficient soil nutrients. 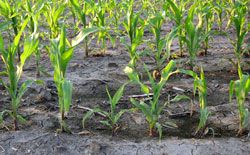 Figure 3. Uneven stand due to wet soil conditions. Note that variable soil areas are affecting some plants more than others.

Starter fertilizer applications to corn have been well researched and documented. The scientific literature shows numerous cases where starter has produced positive, meager and no corn grain yield increases. This array of results means that positive grain yield responses are likely related to both environmental and cultural interactions. Several important studies are discussed below.

Starter Research Results by Geography and Type of Nutrients in Starter

Because starter fertilizer experiments are often conducted using N, P, and K fertilizers it is not always exactly clear which nutrient provided the yield increase; however:

Conclusions: It can further be concluded that if growers in the central Corn Belt states are using high rates of broadcast fertilizer (P and K) in a build-and-maintain fertilizer program, starter P and K yield responses would be even less consistent and unlikely, especially if conventional tillage practices are being utilized (Kaiser et al., 2005).

Consistent grain yield responses to starter fertilizers may also be expected on soils that have low soil organic matter or soils that have coarse (sandy) soil surface textures. Many soils formed from Mississippi River alluvium that stretch from portions of central Minnesota to the Gulf of Mexico fit this description. Several studies report results by soil type: 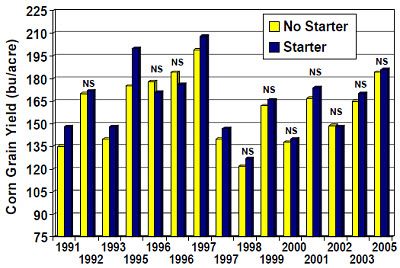 Conclusions: It seems apparent from the reviewed literature that starter fertilizers of N, P and K in sandy loam and coarser-textured soils might be warranted even if P and K levels are high. However, it is impossible to tell if N, P and K are needed or just N, due to conflicting findings in these environments.

Kansas State researchers studied five hybrids ranging in maturity from 103 to 113 RM, with and without starter fertilizer (N and P) in a no-tillage production system (Gordon, 1997). This Kansas study found that starter fertilizer significantly increased early season growth, N and P uptake at V6, and N and P concentration in the ear leaf. However, no hybrid by starter interaction was found (i.e., all hybrids responded similarly to starter application). The study also measured growing degree units (GDUs) to pollination. All hybrids required less heat units to begin pollination when starter fertilizer was used (Table 1). This is a key finding for dryland corn production in Kansas, where yield is often limited by late season drought stress. Furthermore, earlier pollination under these conditions can lengthen the grain filling period and increase corn grain yield potential. 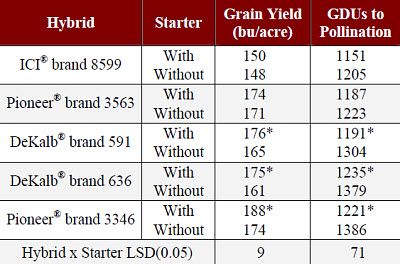 *Significant at the 0.05 probability level.

2 Bray P-1 for acid and neutral soils, Mehlich-3 for all soils.

5 Applied in band preplant or beside the row at planting. 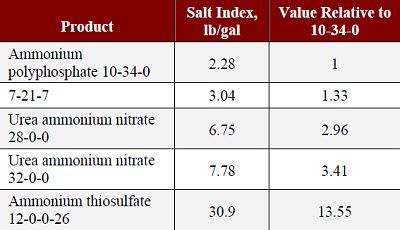 Products like ammonium polyphosphate (10-34-0) have a low salt index value (2.28 lb/gal) while ammonium thiosulfate 12-0-0-26 possesses a high salt index value (30.9 lb/gal). The limits for application rates of 10-34-0 to help avoid salt injury as a function of fertilizer placement and soil texture are shown in Table 4. Salt damage is most pronounced when soil moisture is low, so adequate soil moisture at planting or rainfall soon after help minimize salt injury. To diminish the probability of salt injury, avoid over-applying nitrogen, potassium or sulfur fertilizers close to the seed.

6Determine safe application rates for other fertilizers by dividing the value in Table 4 by the “Value Relative to 10-34-0” in Table 3.

7The safe application rate for soybeans is 1/2 of these values.

Higher corn prices and changes in farming practices (e.g., earlier planting) may create new roles for starter fertilizers beyond their traditional applications. One such role may be as insurance against prolonged, unfavorable weather conditions occurring soon after planting. Growers and agronomists are encouraged to continue testing starter fertilizer in a variety of field situations to further determine when and where these treatments may be most responsive.